Tanzanite is the blue-violet variety of the mineral zoisite, its unique colour caused by small amounts of vanadium. Tanzanite is only found in Tanzania, East Africa, in a miraculous strip of land only around 7km long by 2km wide. The name – after its host country – was given by Tiffany & Co who introduced it to the market in 1968 with the slogan ‘in Tanzania and Tiffany’s’, but it has gained widespread popularity ever since.

Today, tanzanite is beloved for its sumptuous, rich colouration. With remarkably strong trichroism (meaning it can show three different colours depending on the angle at which it’s viewed) it displays blue, yellow and burgundy.

Often tanzanite is heated to unveil and intensify the desired purplish-blue colour, the burgundy/brown is therefore eliminated, leaving a gemstone that appears purple when viewed in one direction and blue when viewed in another.

(In rare cases, zoisite is found in pink, green and yellow. Although some refer to these as ‘green tanzanite’, they should be correctly be called green zoisite.)

Tanzanite can be transparent to translucent, with varying colour saturation. Often found as broken fragments, but when well-formed the crystals are beautiful. Most of the crystals are a light lavender hue, but the rarest and most desirable has the stunning blue violet colour with even flashes of burgundy-red.

Tanzanite has a hardness of 6.5 on the Mohs scale, which is relatively soft. It’s therefore susceptible to scratches, abrasions and bruises. Don’t let this deter you from enjoying this stunning gemstone however. Taking these factors into consideration, tanzanite is best worn in jewellery that is either for occasional wear, for example a right-hand dress ring or set into earrings and necklaces to protect it from the possibility of being knocked or damaged. For this reason a tanzanite engagement ring would not be recommended. Avoiding ultrasonic cleaners and excess heat is also advisable.

Tanzanite’s grading scale is the same as that used for most coloured gemstones; pleasing and symmetrical cut proportions, freedom from inclusions and so on. The colour grading is more complex however, describing how saturated the gemstone is in terms of depth and intensity of colour.

AAAA+ = Vivid+ (The strongest colour it can be)

While the last three grade categories are certainly the most sought after, don’t forget that the intensity of colour must be balanced with hue – the shade of colour the gem exudes as well as evenness of colour.

Combined with superb cutting and faceting, as well as fine clarity, this is what it takes to achieve a true ‘gem-grade’ stunning gemstone which exudes life, sparkle and brilliance.

Tanzanites from The Jewel Matcher

“Our personal passion for the gemstone has led us to create one of the finest collections out there, using only precision-cut gemstones combined with the very highest grades of colour.

This passion also needs the right partnership to ensure it reaches its intended destination, which is why we only work with those that hold the same passion for the collections. Helen’s and all at Ainsworth Jewellers’ love of tanzanite means they’re committed to bringing their customers the best.” 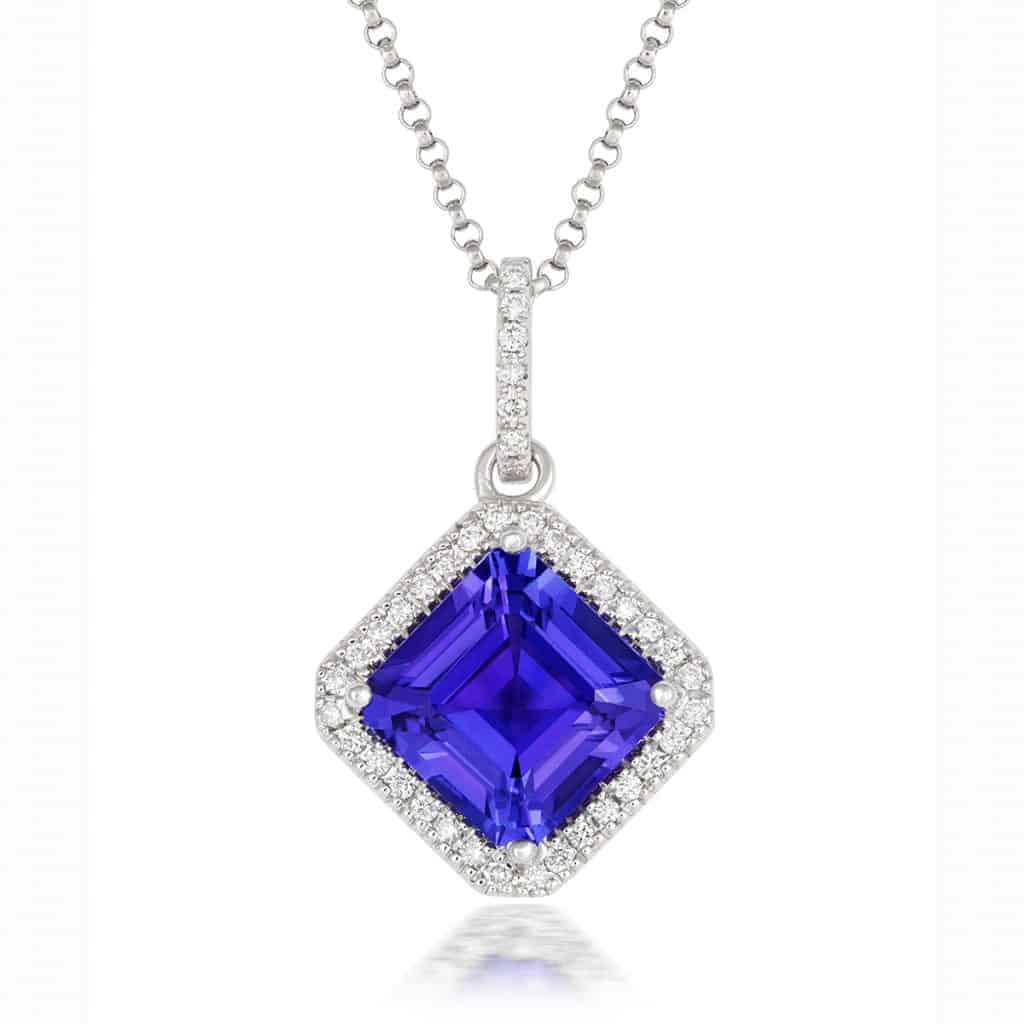 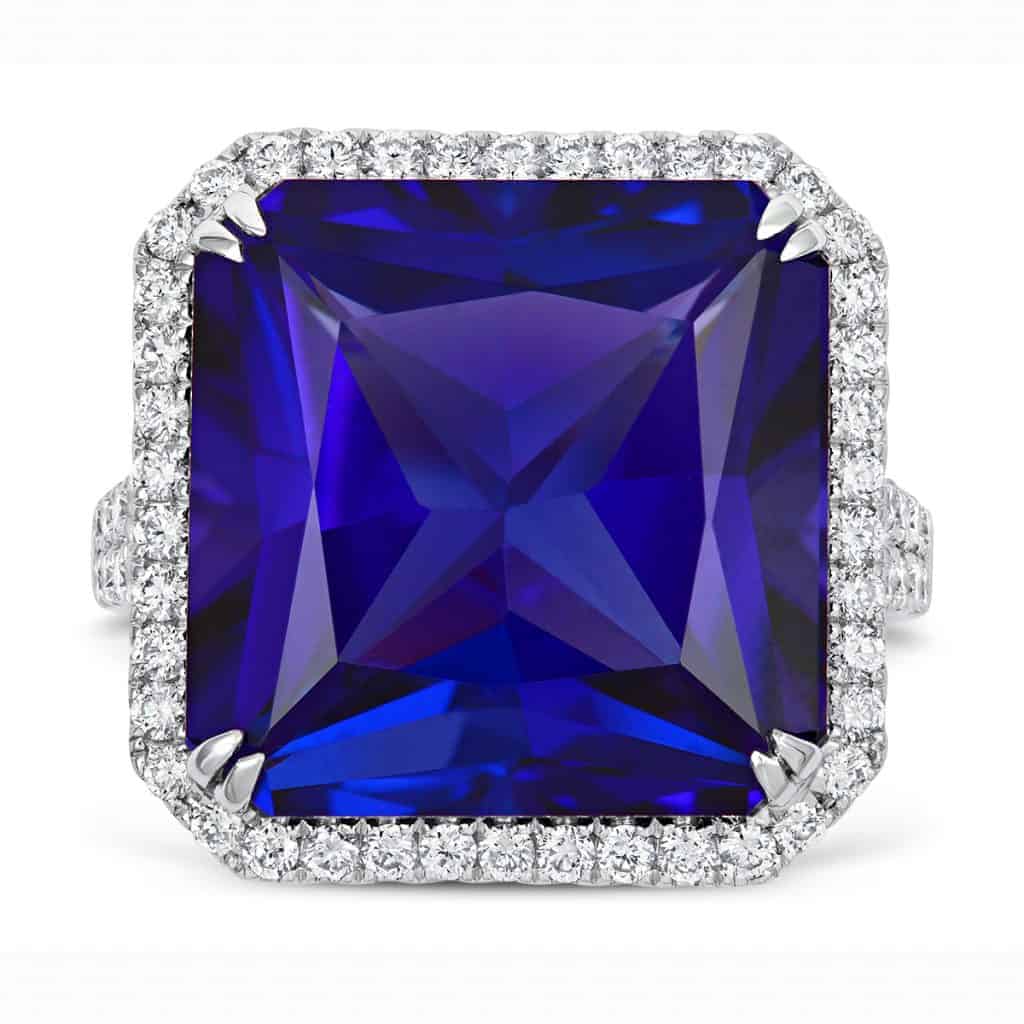 Available to order via Helen Dimmick 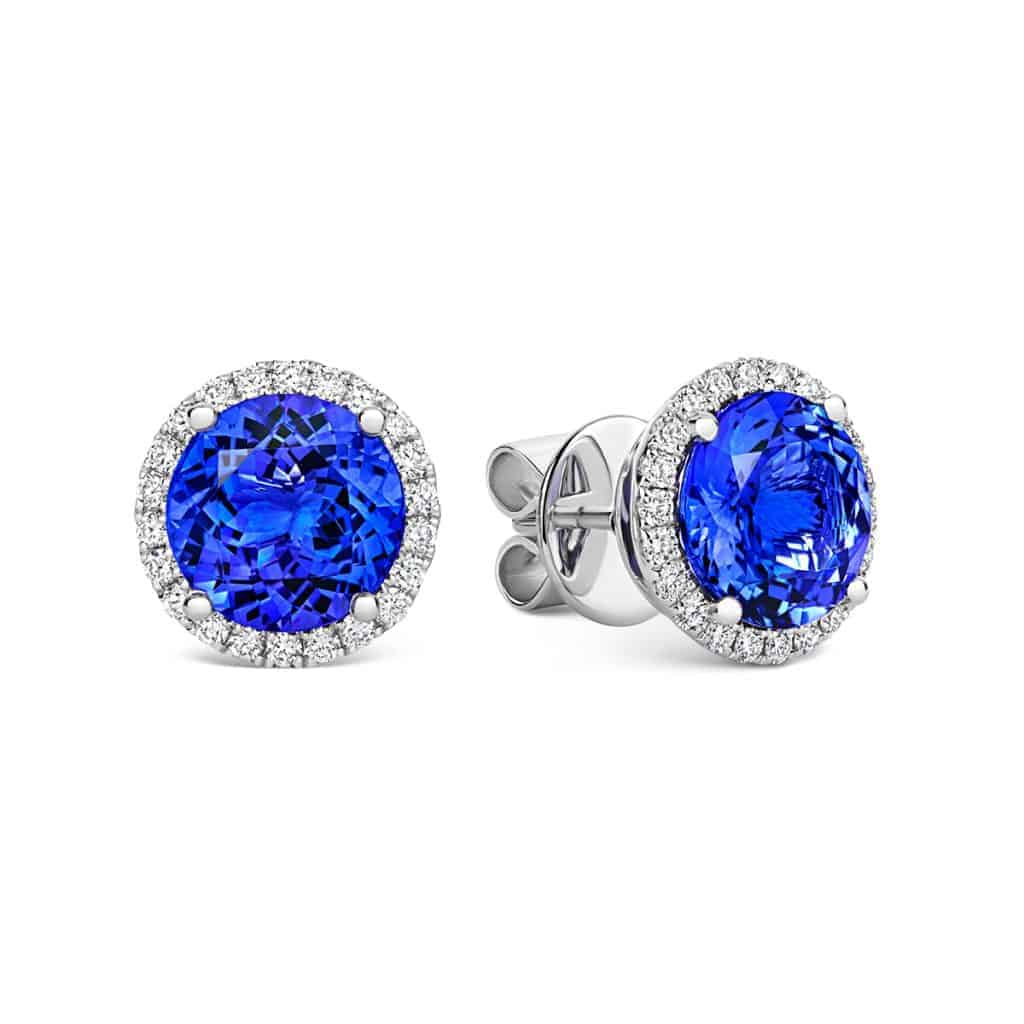 Turquoise is one of the gemstones to celebrate the month of December. A very distinctive sky blue to greenish blue colour, turquoise is usually an opaque, light gemstone.  The colour is caused by iron and copper, the latter produces the blue hues, whilst chrome and iron add tonal variations of green.  The most popular shade being the sky or duck egg blue, also known as ‘Persian blue’.  Other sources include the USA, Mexico. Russia, Australia all dry, barren, arid regions where copper, leached from rocks by rainwater, reacts with aluminium and phosphorus.

One of the first gemstones to be mined, Persian deposits have been worked for around 3000 years and it was even found in Tutankhamun’s tomb in 5,500 BC.  In Central American civilisations turquoise was used for beads and inlay work.  It was subsequently introduced into Europe in the 16th Century via Turkey and this is where the name comes from. 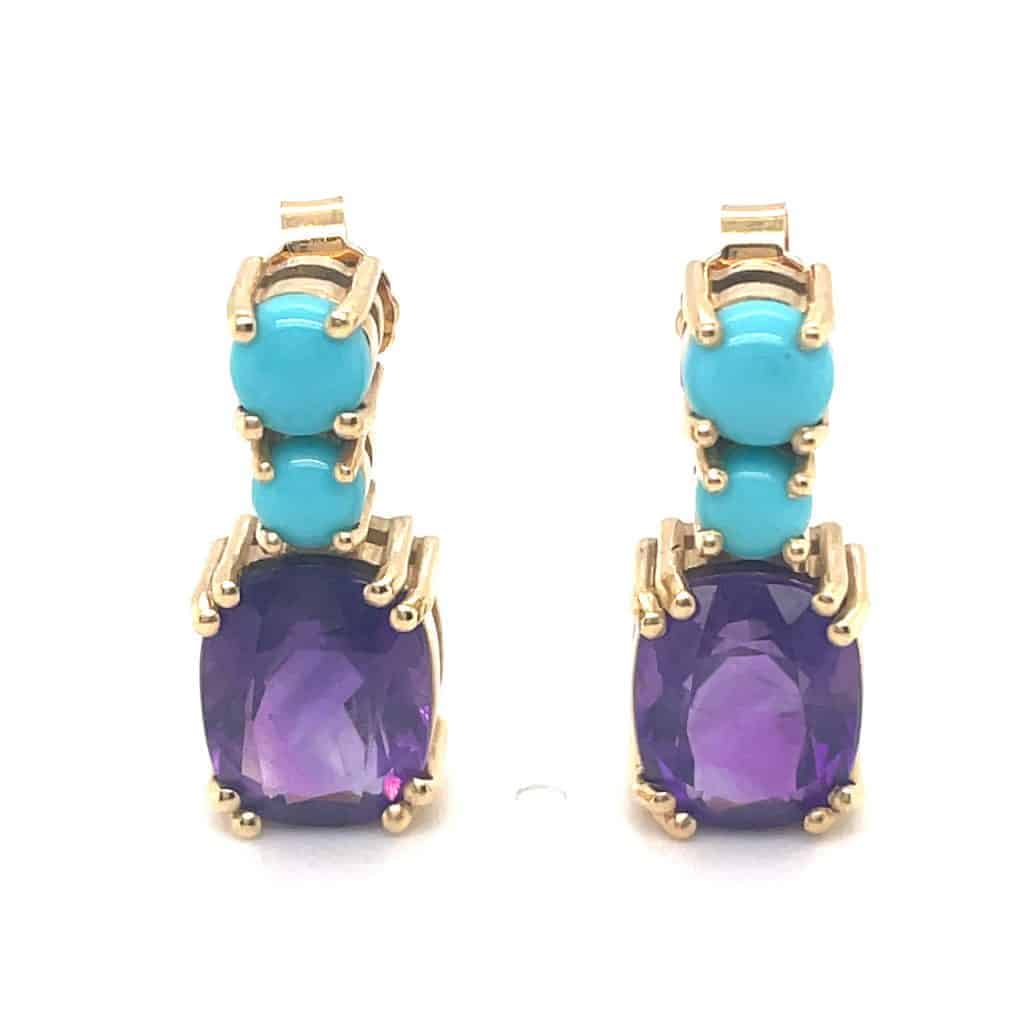 Gem quality turquoise is a polycrystalline material which occurs as small nodules and thin seams.  Quite often small patches or veins of brown or black host rock, known as matrix can be seen in the stone. The presence of these ‘spider-web’ patterns can often lower the value of the stone. However, some buyers actively seek stones with a presence of its matrix as they can be more unusual and attractive.

To answer the question ‘is turquoise a gemstone?’ we should refer to the gemstone definition being ‘rarity’, beauty and durability.  Every gemstone has to be assessed for its individual properties and characteristics (it is for this reason as a gemmologist we do not use implied divide of ‘precious’ and ‘semi-precious’.  That sources of this gemstone are rare, its colour is inherently beautiful, the only factor to consider is durability.  With a hardness of 6 on Moh’s scale it can be porous and prone to fracture it is also sensitive to direct sunlight and natural solvents such as perfume, oils and makeup products so Remember to look after this gemstone.

For me the gemstone has enormous personal meaning, as a newborn baby an Egyptian doctor a kind colleague of my mother’s, gifted to me this beautiful pair of gold and turquoise ear studs; in the shape of a simple flower these would be the first ever jewellery I received, and I often think about the full circle of life knowing that I would one day write all about Ancient Egyptian jewellery for my university thesis…

Years later I was received this simple alternate half pearl and turquoise ring from my Nana, from whom my love of jewellery was inherited, now often worn as a guard ring on top of her wedding ring I so proudly wear on my right hand. 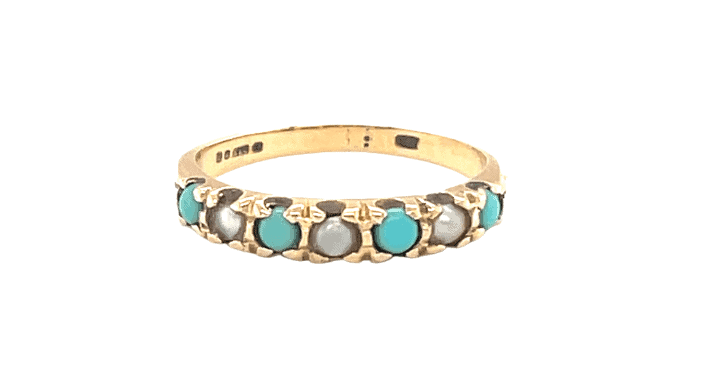 Half Pearl and Turquoise ring

Due to the distinctive hue the colour of turquoise has become synonymous with the Forget- me-knot and its associated symbolic meaning.  This floral motif has been used to as a meaningful gift or keepsake when someone is lost in antique and contemporary jewellery and even now powerful logo for charitable causes such as Alzheimer’s society.